Recording in a Haunted House 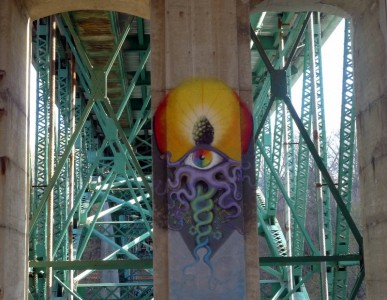 As you listen you may be wondering, but, no, my friend Steven and I did not drag a piano in under the bridge here, though that might have actually been kinda fun!

Sure, the defining element for my Urban Flute Project is offering a visual representation of the actual space you are listening to, but this is one of the rare exceptions, so I hope that you will indulge me – in this case I couldn’t resist putting together this image and music that seemed so perfect for one another!

I still had the music of Satie rattling around in my head as I came from rehearsal and wandered into the hidden Rosedale world as described in the previous post. While I reviewed photos from that afternoon, I realized that by chance this startling graffiti goes very nicely with the exotic mysticism of Satie’s Gnossiennes! I would credit the graffiti-artist, but I didn’t see a tag to identify who it might be…

It was great to be re-united with Satie’s music, the Gnossiennes in particular, penned back in the 1890’s. As much as I enjoy the Gymnopedies contained in the same folio, I find they tend to be over-played. These two sets of pieces are like day and night, with the Gnossiennes so mystical and illuminating, wonderfully wide open for interpretation. Written originally for solo piano, any of these pieces adapt nicely for flute and keyboard, with the flute taking the upper line in the music.

Here is the score so that you can print it off and follow along, or better yet even try it yourself – a kazoo or humming to yourself counts! The challenge for any instrument is to strike up a balance between sustaining the hec out of the melodic line versus conveying the ‘attack and decay’ of the piano original – listen for how some of my long notes have a bell-like tone, strong at the beginning and gradually diminishing to blend in with the syncopated harmonies of the piano, as I try to retain the texture of the music as it was originally intended. And of course, piano can’t employ vibrato, so that must also be handled with a certain discretion.

Satie’s quirky suggestions that he inserts into the score offer another layer of musical ambiguity with directives such as Shining, Questioning and, my favorite, On the Tip of the Tongue for the final phrase!

For more images from this evocative space hidden away under one of Toronto’s Rosedale bridges, check out the slideshow here.